Establishment of Social Work Study at the University of Colombo

in drugi / and others

As a response to the tsunami disaster that hit Sri Lanka on 26 December 2004, the Faculty of Social Work, University of Ljubljana (UL) has assisted the Sociology Department, Faculty of Arts, University of Colombo (UC) to establish social work education.

The project encompassed three concurrent sets of actions. One covers the formalities of cooperation between the two universities. Another concerns students' activities: joint actions, practice placements for UL students in Sri Lanka, supervised by UC faculty, and vice versa. The third is the implementation of a social work study programme at the UC. This set consisted of the development of a curriculum during visits of UC teachers at the UL; intensive courses at the UC taught by visiting teachers from the UL; and doctoral study at the UL of two former UC lecturers/instructors who assumed teaching positions at the UC upon completion of their studies.

An undergraduate study programme of social work was introduced at the UC in 2008 as a stream, offered for three years within four-year sociological studies, and accepting up to 20 students per year. Students are graduating from sociology - social work stream until the conditions are met for a degree in social work.

Courses of the programme

﻿The project formally ended in the academic year 2013-2014, with undergraduate social work study established at the UC and fully taught by Sri Lankan teachers. Some planned actions took longer to complete (until 2015). Collaboration continues. 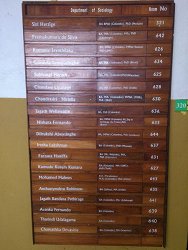 3. Social work study at the UC

Doctoral programme of social work at the UL:

Our website uses “cookies” to distinguish between visitors and to perform website use statistics. This allows us to improve the page constantly. Users who do not allow our website 'cookies' to be recorded on their computer, will not be able to use all the functionalities of the website (video, comment on Facebook, etc.).Cookies are small files that a website that you visited records on your computer. The next time you are visiting the same site, the system can recognise you.